All of us at Hungaria Stamp Exchange want to thank you for helping us have a terrific year! We appreciate your wonderful support and enthusiasm for the advancement of Eastern European philately. This past year we enjoyed chatting, emailing and even meeting in person at the World Stamp Show in New York last spring and look forward to continuing the dialogue during 2017. If you happened to miss the previous blog posts from the World Stamp Show 2016, we invite you to sort through the blog archive and check out those exciting postings. In this issue we will be sharing a summary of our Stamp Collector Survey with plans for new collector development as well as highlights of Alan’s anticipated presentation to Mafitt to support his membership nomination. And of course, we will be spotlighting the New Issues of Hungary, Kosovo, Bulgaria, Slovakia and Czech Republic.

In the HSE Fall 2016 Newsletter we introduced an article about New Stamp Collector Development. “Hungaria Stamp Exchange is committed to supporting multi-generational interest in stamp collecting.” To develop such a program, we asked collectors what sparked their interest in stamp collecting, what topics and countries they collect and what motivates them to keep collecting. And most importantly what would they say to inspire new and potential collectors?” To that end, we asked our readers to complete a survey and share their comments. What we learned was that collectors started collecting as youth or as experienced adults nearing or starting retirement. Many had become interested in collecting because of a friend or relative and enjoy collecting as part of a group. Most like collecting to learn more about the world, various cultures and because it is interesting and fun! Hungaria Stamp Exchange applauds the efforts of the American Philatelic Society (APS) and American Stamp Dealers Associates (ASDA) in developing support for youth and new Stamp collectors of all ages. We will keep you posted on our efforts to develop a multi-generational community based program to support new collector development.

We thank you all for your continued patronage. We are extremely pleased to be able to made these New Issues and other special philatelic offerings available to you.
Best wishes for a peaceful New Year, 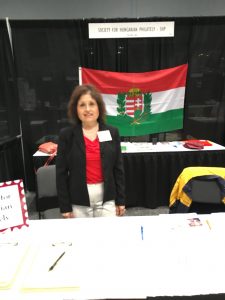 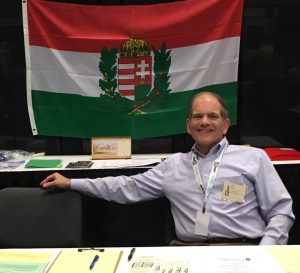 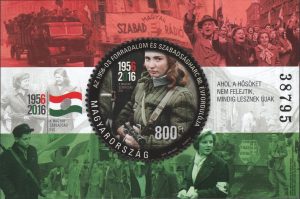 honors the brave men, women and children who stood up to the tyranny and oppression of the Soviet Regime. This stamp depicts in the center Erika Kornelia Szeles (1941-1956) while the frame is a montage of photos taken of the actual events of the Revolution. While completely out numbered and standing alone in the world, these Hungarians are today celebrated as heroes in their fight for freedom.

Stamp Day 89
Treasures of the Museum : Pipe and Chess Museums 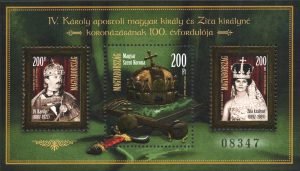 Harvesters & Parliament
Magyar Posta is celebrating the 100th Anniversary of the Harvester and Parliament stamp series, which is considered a classic by philatelists. 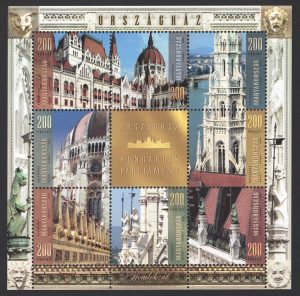 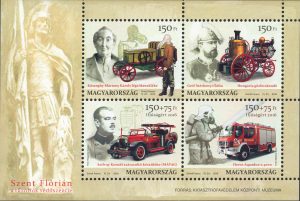 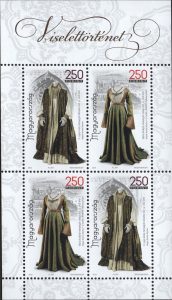 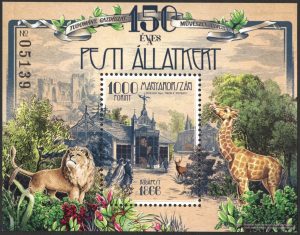 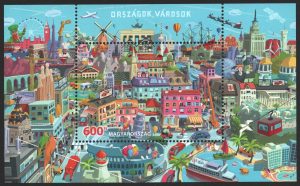 a truly inviting colorful miniature sheet which represents places of interest and features of the European Union countries and cities.

Each year in addition to regular new issues, Hungary also publishes “Special Issues”  of some of the stamps.

These “Special Issues” may be in the form of sheets, metallic embossing or entire presentation booklets. This year we are proud to offer “Special Issues” on the Budapest Zoo and Saints and Blesseds 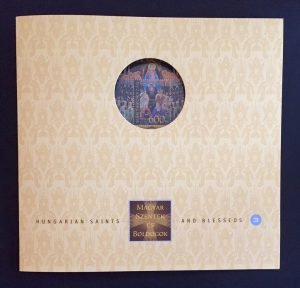 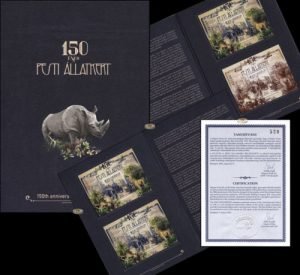 Jan Jessenius Birth 450 Years Ago
a scholar who studied medicine with an interest in politics and astronomy. 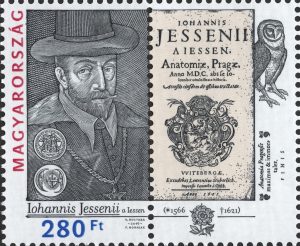 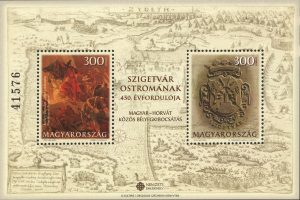 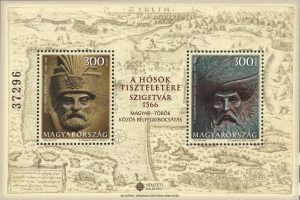 This stamp honors the heroes of The Siege of Szigetvár.

The siege of the fortress of Szigetvár, Kingdom of Hungary, blocked Suleiman’s line of advance towards Vienna in 1566. The battle was  fought between the defending forces of the Habsburg Monarchy under the leadership of Nikola Šubić Zrinski, former Ban of Croatia, and the invading Ottoman army under command of Sultan Suleiman the Magnificent.

In January 1566 Suleiman went to war for the last time. The siege of Szigetvár was fought from 5 August to 8 September 1566 resulting in an Ottoman victory, but heavy losses were inflicted  on both sides. Both commanders died during the battle. Although the battle was an Ottoman victory, it stopped the Ottoman push to Vienna that year.
The importance of the battle was considered so great that the French statesman Cardinal Richelieu described it as “the battle that saved civilization.” The battle is still famous in Croatia and Hungary and inspired both the Hungarian epic poem The Siege of Sziget and the Croatian opera Nikola Šubić Zrinski. 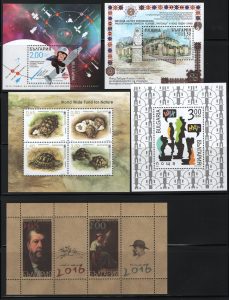 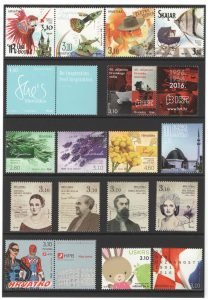 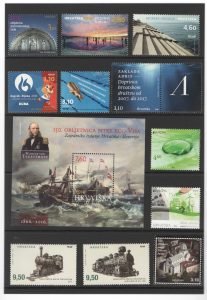 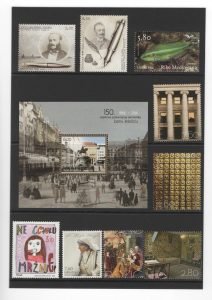 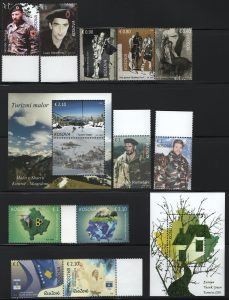 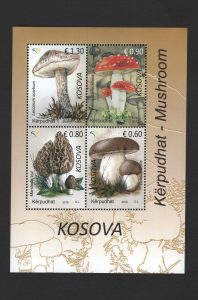 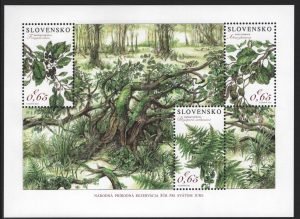 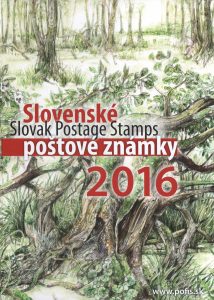 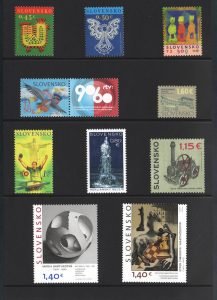 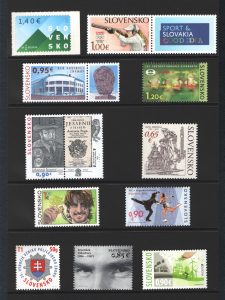 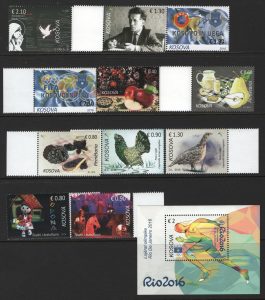 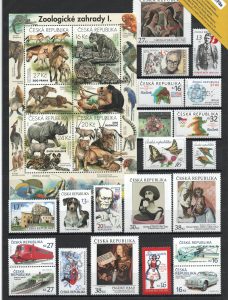 Hungarian Society for Philately Research established 1980’s is an institution whose purpose is expanding knowledge and disseminating this knowledge to the public. We of the Hungaria Stamp Exchange congratulate Alan on his nomination and becoming a member of this prestigious international organization. We look forward to Alan completing his research paper and presenting it in Hungary in the Spring 2017. While still in the early planning stage we plan to bring the presentation in person to Hungary this spring and will post back to all of you on the places we visit and learn about on our trip.

HSE also stocks stamps from previously existing or“dead” countries. With stock of over a million stamps it’s hard to keep them all online, so do let us know if you can’t find a stamp on your want list.

We invite you to check out our blog at www.hungarianstamps.com/blog for previous editions of our newsletters. And we always look forward to hearing from you!